How To Steam Milk for Espresso

While espresso may be the heart of a cappuccino or latte, milk accounts for the majority of the drink.  Learning how to steam milk, therefore, is just as important as learning how to pull a shot of espresso when you’re making one of these drinks.  (It’s also just as important if you’re making a macchiato or cortado, even though these drinks use less milk than cappuccinos and lattes.)  Here’s how to properly steam milk for warm espresso-based beverages.

Know What You’re Trying to Create You should steam milk the same way regardless of whether you’re making a macchiato, cortado, cappuccino or latte, as all of these drinks call for the same type of steamed milk.  They’re simply different sizes.  All of them combine espresso with the same, smoothly textured steamed milk.

You also should steam milk the same way regardless of whether you’re interested in making latte art.  The microfoam that’s required to produce great latte art also creates the best-tasting beverages.

Properly steamed milk will be smooth and silky.  It won’t have any large bubbles, nor will it look glossy like a cold glass of milk.  It’ll resemble wet paint, or possibly marshmallow fluff with tiny bubbles in it.  It’ll be velvety, and stick to the side of a pitcher or a spoon.

To steam milk, you will need milk (whole milk, or even half-and-half, works best), a steaming pitcher, steam wand and sanitizing towel.

The milk should be as cold as possible, without freezing it.  (Milk that has been previously frozen won’t steam properly.)

To reduce the amount of milk wasted, the steaming pitcher should be appropriately sized for the beverage you’re making.  For instance, don’t use a large pitcher that will hold enough milk for two lattes if you’re only making one cortado.

How to Properly Steam Milk

Once you have your milk and equipment, there are a few steps to follow before you actually begin steaming:

To steam the milk:

Once you’re done steaming milk, you should have a pitcher full of soft, velvety microfoam.  If there are lots of large bubbles, you’ll need to start over with fresh milk and try again.  Sometimes, just a few bubbles can be remedied.  If your milk isn’t perfect microfoam, try the following

You should now have a pitcher full of beautifully steamed milk that’s perfect for making a beverage with. 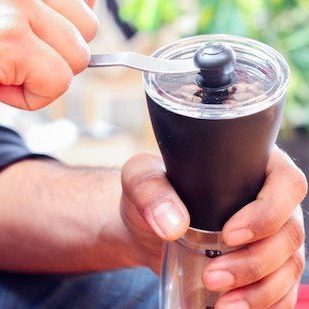 The Advantages of a Hand Grinder

The Advantages of a Hand Grinder